Teams from community crisis response, reablement, extracare and neighbourhood apartments all featured in the broadcast on BBC Breakfast and the 1 o’clock news on Friday 9th December. BBC health correspondent Dominic Hughes spent time with the teams seeing how they help prevent people going into hospital, and support them to be quickly discharged if they do need hospital care.

The feature followed North Manchester community crisis response team members Manju and Kara on a visit to a patient’s house. Crisis response takes calls from the ambulance service, GPs and other professionals and quickly responds within 1 or 2 hours (depending on severity) to visit patients at home instead of them needing to go to A&E.

The team is made up of expert health and social care professionals including advanced practitioners, community nurses, social workers, therapists, pharmacists and other members. Over 400 patient contacts are made in this way each month across the city and 9 in 10 of those patients are able to avoid going to A&E and hospital.

The piece features interviews with Eric – a resident in extracare supported housing since a fall at home and the resulting hospitalisation meant his old house wasn’t suitable for him anymore – and Mohamed who is using a neighbourhood apartment while new accommodation is found for him.

Extracare provides permanent supported independent living to people, often after time in hospital. Neighbourhood apartments are a short term offer allowing people to be discharged from hospital quickly while adaptations are made to their own home or new accommodation is sorted. They would otherwise often have to stay in hospital.

The neighbourhood apartments in the feature also have support from reablement. Reablement is the LCO’s in-house team providing support to people to help them live independently at home.

The BBC also interviewed staff members and LCO chief executive Katy Calvin-Thomas who explained how integrating community health and adult social care in the city has helped the city work in new ways through the Local Care Organisation.

You can view the 4 minute clip above. Thank you to the BBC for allowing us to share it. There is also an online article on the BBC News website available here.

Staying active can be difficult when it's cold outside!

We have two great opportunities for Band 6 OTs to join the Community Adult Learning Disability Service in Manchester.

Please share with your networks. We hope to see lots of women at our clinic.

Join us this Friday (27th) for a community get-together at @didsburymosque with free hot food and drinks, health checks and much more! 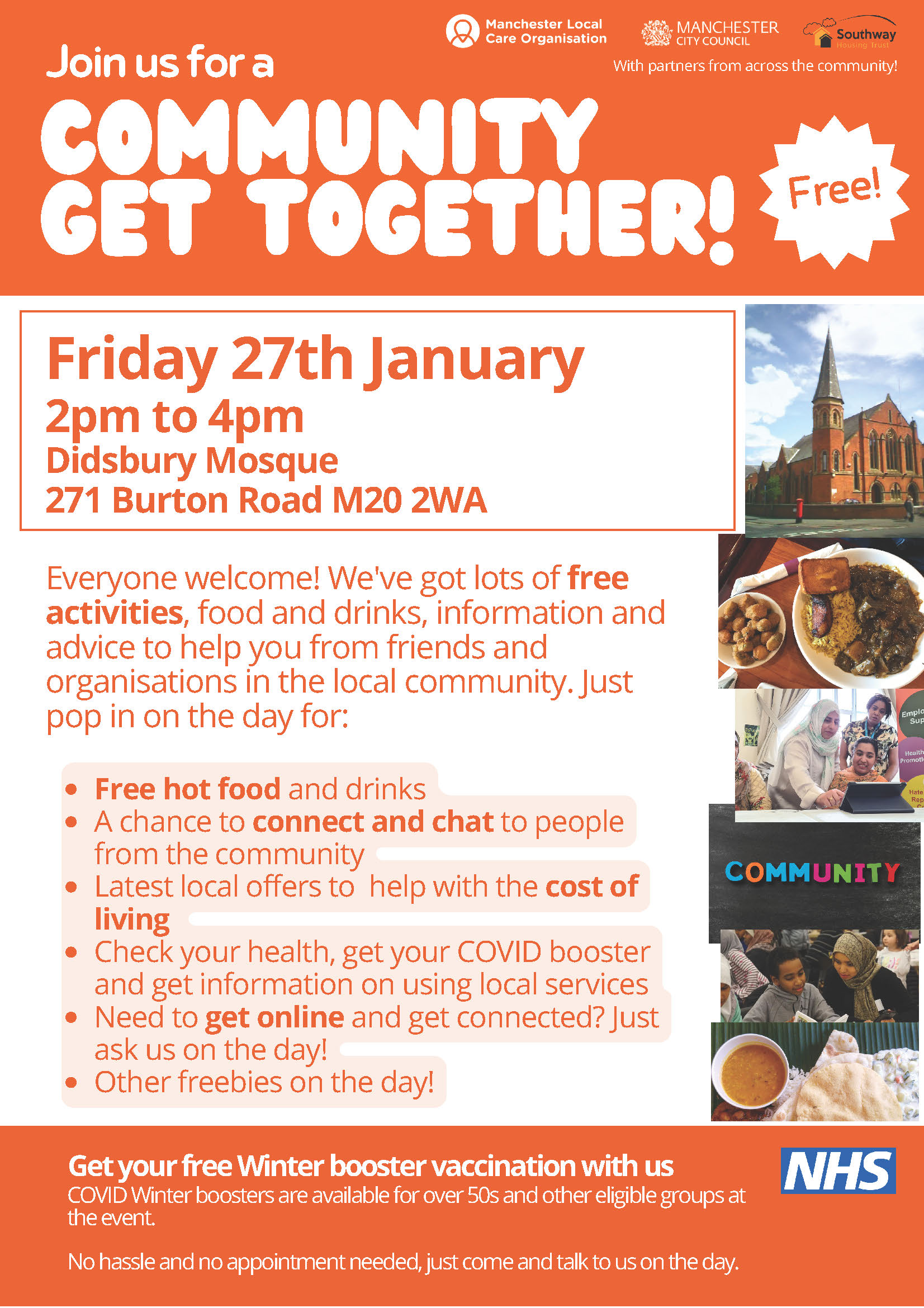 Join us from 2pm - 4pm at Didsbury Mosque for free activities, food and drinks, information and advice. All are welcome!

The latest Withington and Old Moat (incl Ladybarn) Newsletter can be viewed here - see 11 images below. If you would like a PDF version of this or if you have any groups/services that you'd like to promote please email me yasmin.holgeth@mft.nhs.uk